Whether you live in a high rise apartment, a unit or you’ve built a brand new home in the suburbs, everyone wants to maximise the amount of natural light in their living spaces.

Opening up your home to light brings the outdoors, indoors and can also help save on energy bills. The downside of all this wonderful life giving, energy saving natural light is when it impacts you or your neighbours privacy. While you relish the idea of taking a shower with a view of the trees, your neighbours don’t want to see you singing in the shower from their balcony!

Window privacy film is an affordable, versatile and great looking solution for solving overlooking issues with neighbours and providing privacy, without blocking the light. Over the last 15 years the popularity of window privacy film has grown exponentially as windows have become bigger and glass has become a feature design material in many homes.

We recently completed a large window privacy film installation in a new home in Melbourne. The double story house was in the final stages of completion. The house took up most of the quarter acre block and had windows that overlooked neighbours on both sides. The owners had also installed an in-ground swimming pool which was built in close proximity to the neighbours’ fence, overlooking the rear and side properties. 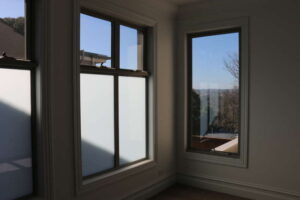 When new homes and renovations occur in older suburbs, they can have a significant impact on neighbours. Single storey homes are often replaced by double storey houses and new homes are generally larger and are built closer to the boundary line. The result is that surrounding neighbours are impacted by changing lines of sight both inside and outside the house.

There are important regulations for privacy and safety that must be observed when building or renovating. These rules help protect the privacy of neighbours.

Frosted window film is a practical, affordable and versatile alternative to expensive frosted glass panels. It can be cut to any size and almost any design can be applied to the film, to enhance the design aesthetics of any home.

The job required a frosted window film design which was in keeping with the high end, classic design of the home. Windows were to achieve a uniform opaque glass look, without any decoration, that maintained light and achieved privacy.

No expense had been spared on this beautifully appointed home. The owners had invested in large open plan living areas and generous bedrooms that maximised the light. Nevertheless, privacy issues effected two upstairs bedrooms, two bathrooms and a glassed balcony on the first floor.

Frosted window film can be cut to any size or shape and with experts can be installed in minutes. We installed privacy window film to the lower part of the upstairs bedroom windows, allowing privacy from neighbours, but still allowing light into the room and a view through the remaining top part of the windows and front window. 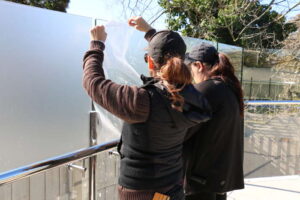 An in-ground pool at the rear of the house was causing privacy issues. From the pool deck the neighbours were being overlooked and their privacy was being impacted.  To meet regulations a glass pool fence had been installed around the pool on three sides.

To meet regulations and to create privacy around the pool, we installed window privacy film on each glass panel on the pool fence. High quality window film can withstand changes in temperature, wind and the damaging effects of the sun, and will last for many years when it is installed outside on balconies and pool fences.

If you have a privacy window film installation project or decorative window film project in a residential or commercial building, contact us at Apply To Glass. We’ve been installing frosted window film in Melbourne for over 15 years, and working with home owners, building companies, architects and interior designers.